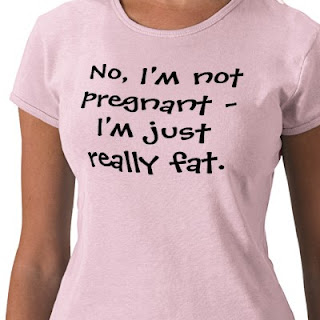 So my cycle did everyone a favour and showed up 'early'. Instead of putting me out of my misery it seems to have put me into it.

I'm really upset this morning. Disappointed I think would be an understatement. I am so sick and tired of this monthly rollercoaster. I want to throw in the towel. I don't want to try anymore, but I still want a baby. Rudi said the other day he thinks I'm broken. I don't think he was serious or meant to hurt my feelings, but he still said it.

So now I sit like an idiot crying at my desk. Again. I need to find a place to go and scream because I really want to.

Now I don't know what to do. I wish I could just forget about it, but it's really not that easy. I'm tired of sexy time not being fun anymore. I'm tired of crying. I'm tired of resenting and being envious of other people who also deserve happiness and babies.

And so this rant could go on forever...

Before you say anything about the t-shirt being self deprecating. I get to say it. I was declined for a policy because of my weight. They wouldn't take my money. Bastards. Went for an extra walk yesterday for good measure. I'll show them.
Translated from gibberish by acidicice at 07:07

I am so sorry Heather. I know the feeling of that dissapointment every month and it is something that no one can understand unless they are trying (and hoping) month after month too. Thinking of you and hope that it happens really soon for you.

Does Rudi suffer from foot-in-mouth syndrome - Insensitive bugger! You do need to forget about it and get involved with something else that keeps you really busy so that you don't have time to worry about getting or not getting preggers. Baby making should be fun. Forget about the cycles and crap and get creative with your lovemaking. Be like a teenager and do the deed in 'illegal' places. Being a loving and communicating couple is the most important thing before you bring kids into the equation.

I know this might sound weird but there is this place called 7.5 and they helped my stepmother fall pregnant. Her and my dad were trying for a long time. They don't make you take tablets or anything they basically give you eating plans and stuff to make your body produce the right conditions. They are in Bedfordveiw I don't know if that is far for you. And the diet that they put you on is great for loosing weight too so you can do 2 things at once. Plus I get just as excited I love your blog and am waiting in anticipation for the good news which I am sure will happen soon just hang in there!

sorry to hear of you disapointment but im still thinking of you and definately holding thumbs for the near future! i had a friend that was struggling to get preggies as well she also did the temp thing (her hubby was a policeman so he was called at all different hours when the temp was right)anyway she eventually threw in the towel on that idea and fell preggiess on her own (he claims it was after a night of lots of strau rum drinking)

talking about doing it in illegal places like teenagers reminds me of how i fell pregnant. come on girl, chin up. we are all doing this with you. i can text you every night to push you to walk if you like? i also have some great weight loss tips- got my dad to lose 25kgs....
p.s yourparenting wont let me read blog?????

hey hey hey, shhhh, relax dear, you'll probably fall pregnant when you're not even "trying" just let it happen, you haven't been trying for that long anyways, most people take longer than this so don't feel down, it'll happen :) maybe stressing so much about it isn't conducive to falling preggers, stress can play a role in alot of things. Just make your "sexy time" about sex and enjoyment not about that it's the right time of the month etc etc.

I think Rudi meant it as a joke. I don't think he realizes that I *feel* broken.

You know, many of us long for something that others have that we feel we don't have... a baby, true love, a lovely home, a big car, not feeling broken... whatever it is, many of us feel if we only had that one thing, our world would be complete.

I'm so sorry, trying and failing to conceive is the worst thing.