***WARNING***
Some readers may find content graphic or upsetting

It hit me this morning for the first time. Yesterday I was feeling guilty for not feeling worse. For not having cried yet. I know I'm supposed to, but it hadn't happened. This morning it happened. I cried. Not a snivelling, silent cry either. A full blown snot and howling cry. I know I'm allowed to. I've given myself permission to feel however I want to and not to hide my emotions and bottle them up. Unfortunately Rudi was at work and wasn't here to comfort me, so I hauled out my laptop.

Let's first cover what My Evil Mother did that upset me. Just after I had come out of theater her and my grandmother went to look at the baby. Rudi and I were alone and he shared with me that he keeps having this vision that there is nothing wrong with the baby. That we had made a mistake and we couldn't fix it now. I tried to re-assure him that the scans were clear enough even for a layman to see that there was something wrong.

When My Evil Mother re-entered the room she kept saying 'He's perfect. He's so beautiful'. I kept asking her what she meant that he was perfect and she said 'He had 10 fingers and 10 toes, etc'. This confused the hell out of me, considering that Rudi had voiced this fear not minutes earlier. I asked her if she looked at his hands and she said yes and that he had 10 fingers...eventually she said you could see that the hands were frozen in a claw like position. We had asked My Evil Mother to take a few photos with my phone in case I changed my mind about seeing the baby later on. Eventually Rudi couldn't take it anymore and asked to see the photos. After seeing the photos (video clips actually, My Evil Mother has no idea how to operate a phone) Rudi seemed more calm though. My Evil Mother said the same thing she said to me to my uncle and aunt who immediately started saying things like 'They should sue the doctors for giving them the wrong information'.

After finally mustering the courage to look at the pictures myself I had no doubt that we had made the right decision. In hindsight My Evil Mother was possibly trying to be positive and not to upset me. I did phone her and told her that she is no longer to discuss it with anybody as she seems to be giving people the impression that we terminated a healthy baby. She said that she didn't know how to handle the situation and that she didn't know what else to say. I believe her. It is a difficult thing to go through and there isn't a manual telling you what the 'right' thing is to say.

We had agreed to let the geneticist have a look at the baby, even though we decided not to have a post mortem done. She called me yesterday and asked if I wanted to know about her findings. I agreed as I wanted re-assurance from a medical professional as well. She found that the baby had no anus which was causing the obstruction in the bowel. The baby had no way of disposing of waste. She had an x-ray taken and was able to see that the bottom of the spine did not close as it should and the nerve endings seemed to be problematic as well. She could not ascertain at first why the hands were a problem, but on closer inspection of the x-ray she was able to see that the skull and spine were not properly connected causing the brain to have problems sending messages to the hands. The geneticist asked if we had determined the sex of the baby from the amniocentesis (which we did not) as she could not ascertain the sex upon examining the foetus. Sexual organs should have been well developed at this stage of the pregnancy. We have decided to stick to it being a boy. She asked permission to keep the photos she had taken, I granted her permission and requested her to e-mail some to me as the video clips My Evil Mother took were of very poor quality. She agreed to do so. I will not post the photos of the baby on my blog as I feel that they may be quite disturbing. From the photos the club feet are evident, but it is also clear that one leg is much longer than the other and seems to be facing the wrong way. It almost looks like the leg is broken, which is what they most likely would have had to do to correct that.

I cannot imagine the amount of surgeries and pain this baby would have had to have if the baby had managed to survive. I don't think the baby would have survived considering it was unable to rid it's body of waste. Rudi and I are completely at peace with our decision though and we know that we did the right thing.

A part of me wants to start trying to fall pregnant again immediately. Another part of me is too afraid to. I don't know what we're going to do, but I do know that I do not want to go back onto the pill again. Maybe that was one of the reasons this happened. I fell pregnant really quickly after going off the pill and who knows if that interfered with the development of our baby. I know women fall pregnant on the pill or shortly after going off of it all the time, but you never know what caused the problems with my pregnancy and I'd rather not take the chance. How we are going to prevent pregnancy will have to be a done on a trial and error basis with available contraceptives.

Rudi just got back from work and wants to go fishing. I feel like chopping his head off with a bread knife. He could clearly see that I am upset and need support, but he chooses not to be with me. I told him that I don't want to be alone and that I need him, but he wants to go fishing. I'm seriously fucked off with him right now. 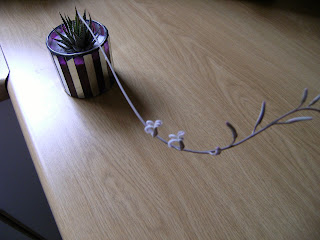 A cactus that I have which is flowering now. Ironic, yet it gives me hope somehow. 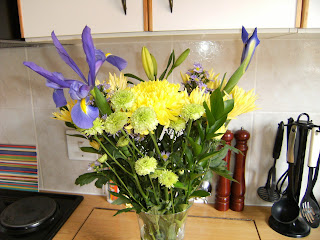 The beautiful flowers I received from my colleagues at work. 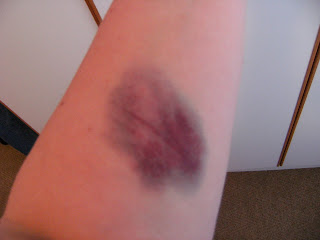 Where they attempted to administer a drip (and failed). 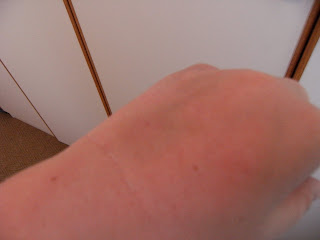 This is where they eventually managed to put the drip in nicely, it's a bit swollen, but not nearly as bad as my arm! 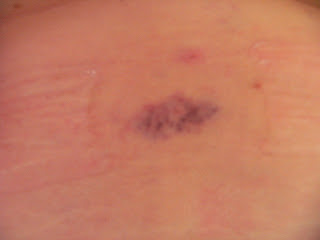 Where they attempted to administer the epidural.

And so my battle scars will heal...now I just have to figure out what will heal my heart. A memorial service will be held for our baby tomorrow after church. That will be the last goodbye.
Translated from gibberish by acidicice at 08:06

Just wanted to say that I'm thinking of you - your Facebook status' have been so heartbreaking and I can only imagine what a difficult thing this is to deal with.

I hope that your healing is fast, and that the heart-sore is replaced with hope.

you're allowed to grieve - and we're all grieving with you.

and there is ALWAYS hope. you're meant to be a mother, and i fully believe that you will be. just stay strong, okay?

Rox, thanks babes. I'm doing my best to keep my chin up, but it's harder than anything i've ever had to do. I can only pray that there is a healthy baby in our future.
Exmi, i'm doing my best girl. I really want a baby now, my heart desperately wants to fill this void. I just don't know how long we should wait.

It looks like if they have hurt you bad trying to administered the drip. Hope you will heal of your emotions fast and I am thinking of you.

I know that I'm reading after the fact, but it felt wrong to read and not comment.