On Friday Rudi spent most of the evening with Lindor and Fence finalising plans for Saturday's fishing trip. I saw him for the first time after 20:00 (despite him saying he would be home around 18:00). I decided to let it slide since I had busied myself washing all the pink spray out of my hair. 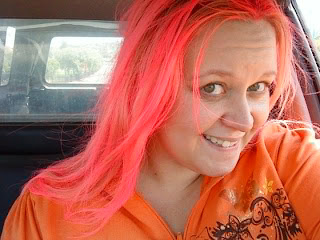 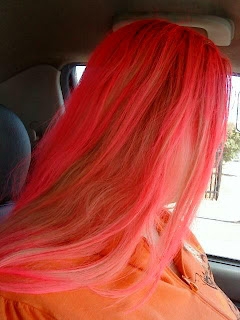 I participated in the CANSA Shavathon this year. I didn't have money this year, but Leebeesa didn't want her hair sprayed, but wanted to contribute, so she paid for me to have my hair sprayed. I got a lot of attention, I must say. Luckily this year the pink actually washed out of my hair. I washed it around 4 times and it all came out. Last year the purple stayed in my hair for quite some time.

Anyway...on Saturday we went on this fishing trip. Rudi was arguing with me over nonsense in the morning - almost as if he didn't want me to go, but I stuck to my guns and went anyway. It wasn't as unpleasant as I thought it would be. Fence and Caregiver pretended that nothing happened. Nobody mentioned the incident and I didn't bring it up either. It was very hot and eventually very windy. I spent most of the day with Caregiver in a tent on the beach. We read, had a nap and made some food for the guys. Not one fish was caught the entire day.

We then went for a braai at Lindor's house. That wasn't too bad either. We tried to play games, but Lindor kept changing the rules. Eventually Rudi and Fence wanted to go and buy another bottle of brandy and for Lindor's wife didn't want him to go with. Lindor went to bed while they were away. When they got back Lindor came back down, but was upset that he could not go with them to buy the bottle. I have a feeling there's more to it than that (perhaps he wanted to get something else as well, but lacked opportunity to leave)...I started feeling horrible and went to lie down on the couch. I passed out fell asleep and Rudi woke me up when it was time to leave. I felt awful. I felt nauseous, had heartburn and was still half asleep. So I survived Saturday.

Sunday we had a braai with the in-laws, which was uneventful as it normally is.

My ovulation microscope is confusing me! From around Thursday is started showing signs on ferning. That is supposed to be the transitional phase that leads up to ovulation. On Saturday my microscope showed NOTHING. We through it odd, so we took another sample and sure enough...it was like fern city. The entire lens was covered in ferns. It was all very exciting! So we started trying then. On Sunday - nothing. No ferns. Not one. I tested 4 times. This morning, no ferns. Nothing. My hopes of success are therefore not high for this month.

Next month we will try from the day the ferning starts to show until it disappears. As far as I understood the microscope should show transitional ferning, then full ferning and then back to transitional once ovulation tapers off.

Weird. At least it ferned though, which means I am ovulating. That is a good thing.
Translated from gibberish by acidicice at 07:41

how reliable is your microscope? it's more likely that it's faulty, rather than one day you are ovulating the next day you aren't. You either are or you aren't. If I were you I'd leave the microscope, use your calendar, try to relax and just have fun trying.

Hi Sarah, the microscope is 98% accurate. I believe it to a certain extent, but will also try 'around' the days it shows up to be sure :)

Wowza, look at the bright fluorescent pink! I love it! :D

I have no idea about the ferning, but OMW that hair of yours is BRIGHT!