I was completely owned by our walk yesterday. I barely made it home. We took the longer route and it wasn't nearly as hot as it was the previous time we went on this route. When we got home Rudi checked the mail and found a lovely surprise in there: 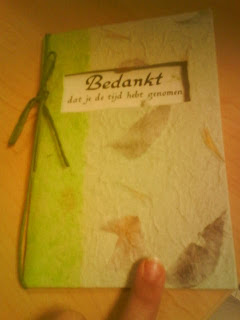 My friend from Belgium sent me a 'Thank you' card to thank me for being his friend and taking the time to make his life better. He reckoned I was feeling down after everything that happened to me last year and thought he would cheer me up. How sweet! He has really been a good friend to me. We have been chatting for about 4 years now and he has sent me some things before.

Rudi and I were supposed to have sexy time again last night since the doctor said it would be a good time to try...but he put his foot in it again and we went to bed angry. Looks like he's changed his mind about not being friends with Boring People. His words were, 'Well he didn't do anything wrong to me'. I was beyond cross and disappointed. I cannot believe he is not offended by this man and his audacity. Then I had to hear about how I actually did have an attitude that day...blah blah. Still, attitude or not, he had no right to do what he did. The only reason I had an attitude in the first place is because Rudi was being his old self and thinking only of his own wants (not needs) and putting me firmly in last place. This of course does not occur to him.

So we're not speaking right now. To put the cherry on the cake my housekeeper isn't able to come in this week because the taxis are striking for the next three days. F&#%@$%!
Translated from gibberish by acidicice at 07:13

His comment 'he didn't do anything wrong to me' would have made me very upset. You are his wife and the guy said something bad about you. End of story. He shouldn't have insisted on saying at the pub when you wanted to go home. He was in the wrong. Sorry he hasn't realised it.

I know, Sarah. I just wish HE knew. ARGH! Men can be such idiots!

The joys of being in a relationship - I remember them well! I am with Sarah in the view that he should have stood up for you even if he didn't agree with you. Parenting demands a large degree of co-operation and solidarity between the parents and your partner needs to develop that solidarity now as do you. The more you disagree with his choice of friends the more he will cling to them! Such is the maturity level of men, I'm afraid.

But give him his freedom and he will cling to them anyway...stuck between a rock and a hard place.

I left a comment earlier but it seems it didn't work!

I'm sorry about the fight babe

Sometimes couples do talk too roughly with eachother. Sometimes friends do too, and strangers. Perhaps you were a bit rude or whatever that night, but for his friend to do what he did afterwards is indefensible. I wouldn't go expecting him to give up his friend, but you have every right to be upset.