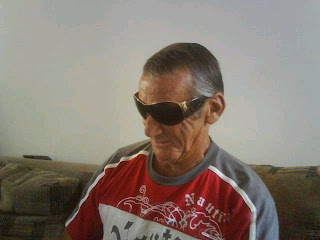 Pictured to the left is (Uncle) Steve. He thought it would be fun to try on Sarah's leopard print sunglasses. I'm glad I managed to catch it...it was classic! Speaking of (Uncle) Steve, he actually faded quite early last night. He's struggling to keep up with the young ones somewhat, but certainly enjoying the time he is spending with us.
Rudi was still playing darts when I went home yesterday. He'd had his fair share of brandy...which didn't bode well. I really should have known better than to...well mention what I mentioned when he'd had Richelieu.
He went over to Crack Head's house which always manages to make my blood boil. I should have left it till this morning though. What a scene...
For some reason Rudi thinks I have a thing for our neighbour. I really don't. He is a really nice guy, but I'm just not into him. He's recently acquired a girlfriend who I get along well with and like very much. I'm really happy for both of them. Rudi still can't seem to shake this feeling though and he saw fit to take it out on me last night. It's just so pointless, the more I tell him there's NOTHING going on, the more he insists that I did or said something to the contrary.
I ran into said neighbour and his girlfriend on the way to work this morning and they invited me over when I come home from work, but I already told Rudi last night repeatedly that I wouldn't visit there if he so clearly had a problem with it. I was kind of non committal to the neighbour so we'll see what happens later today.
I just hope Rudi has snapped out of it though because I'm SO not in the mood for a bad vibes kind of day.
Translated from gibberish by acidicice at 10:00