It seems that winter is upon us! Last night gale force winds were howling outside making it difficult to sleep. It sounded like the house was going to blow down! It was also super chilly when we awoke this morning. When I opened the car door the wind blew it shut, as if sharing my sentiment about not going to work.

One thing I've been worried about is not having any winter shoes. A colleague told me that she found boots that will fit us and I convinced Sarah to come shopping with me. Sarah is a great dresser (and of course has a body to die for) and I wanted her opinion. Sarah is also a great shopper (not in the bargain hunting sense) and I ended up buying TWO pairs of shoes! They were expensive, but I wear shoes for a long time generally so I'm sure I'll get alot of use out of them.

The first pair of boots I bought are brown: 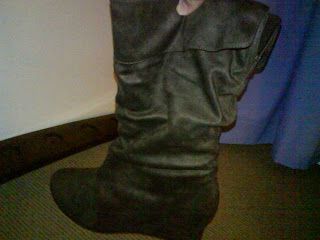 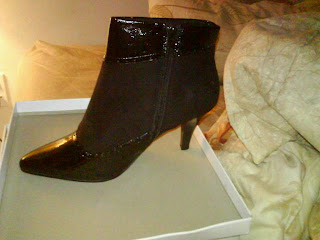 I <3 my new shoes! I don't usually wear heels, but I made a decision a while ago to try and dress less frumpy and to become used to wearing shoes with heels again.

I also bought myself a new pair of black pants and a stunning white collared shirt. I really wanted a nice white shirt for church as I've had to borrow a white shirt from my grandmother and aunt when we have special services. Come to think of it I've spent a lot of money on clothes this month. No matter, I deserve it!

I think I'll wear my sexy black heels, black pants and white shirt to work tomorrow. It's just nice to dress up some times!
Translated from gibberish by acidicice at 07:00