This is a picture of the fish Rudi caught on Sunday: 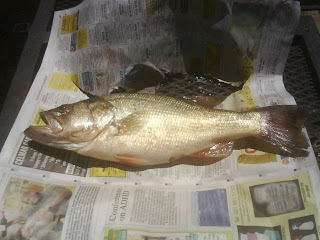 He goes fishing quite a bit, but they normally throw back what they catch. This time for some reason they decided they wanted to try and eat it. I finished work and caught up with them around 2 hours after they had caught this one. They had already rinsed it out with a hose pipe and gone to show it off to Crack Head who couldn’t join them for the fishing trip. When I saw them again the fish was in a cooler bag in some water.

Rudi picked it up out of the cooler bag and to everyone’s surprise the poor fish was still breathing. Its gills were still opening and closing. I felt so sorry for the fish I wanted to cry! I was very upset with them for bringing the fish home to eat :( it’s the same as hunting really, isn’t it? I called him a murderer and eventually he felt bad for the fish. The worst part is that after cleaning and braaing the fish they eventually gave it to the cats because it wasn’t overly tasty. The cheek!

Look. I am by no means a vegetarian. I love meat (not fish!) but I don’t like seeing the animals suffer. Just before Christmas Rudi and I went to buy a half a lamb. We watched them cut the lamb up and I was so upset by the sight of it I wanted to leave the shop. Seeing the lamb practically intact was heartbreaking! I don’t think I’ll give up eating meat, but I don’t want to see where it comes from!

I’ve received a lot of support online about the eating plan. It seems a lot of people have the same idea. Two ladies at work have decided to join me as well. Rudi is already turning into a dieting Nazi and nearly bit my head off when I asked for some Nesquik last night. I keep trying to tell him I’m only starting on Monday, as we’re going shopping this weekend for the food we will need. He doesn’t seem to understand this concept! He also doesn’t seem to understand that you can’t just throw an egg into the lean mince to make patties. The egg counts too! Rudi is a dieting virgin, but I’ll whip him into shape in no time! He he. That and he’ll watch me like a hawk!

We’re also going to the movies on Friday to watch Saw V. It will be the last time we go to the movies and will be able to eat the BIG, BIG popcorn! (Trust me to be thinking of the food instead of the time with my hubby) I think I’ll throw in a diet Coke to ease my conscience. Before you say that popcorn isn’t fattening…the popcorn at the movies is oil popped, not air popped, so it IS fattening. *sigh* only the dry air popped stuff is OK to eat.

I am so tired now already. I’ve worked for 7 consecutive days and seriously need some time off! Roll on weekend!
Translated from gibberish by acidicice at 07:28