The weekend has been quite chilled out. On Friday we went to a colleague's birthday and I had quite a good time. Even dared the dance floor with no drinks in me! I could hardly believe it!

The entire Saturday was spent vegging. It was just what I needed. Today Rudi joined me for church (a rare treat) and we spent lunch at his parents house to celebrate Father's Day.

We were chilling on the couch this evening. I had just woken up from a nap, just in time to catch Friday's episode of 7de Laan which I had missed when Rudi asked me to leave the room with him. I resisted as I was trying to watch TV and enjoying some chocolate, but he persisted and he led me out of the room by my hand. Cool as a cucumber. Once out of the lounge he told me there was a huge spider against the wall. Not believing him I went to have a look and this is what I saw: 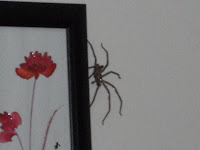 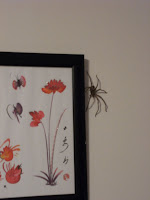 If you enlarge the first picture you will see the reflection of the flash in the spider's eye.

Rudi and I are both terrified of spiders. I was standing squealing and Rudi was trying to calm me, not knowing what to do. I called Bradley, thinking 'he's a manly man', but his advice was to spray it with bug spray and smack it with a shoe once it moved. I didn't want to do that. Then I remembered my grandfather often caught rain spiders where they live and they don't live too far away. I gave him a call and he said he'd be right over.

He caught it in a jar within seconds and has taken it home to release in their garden. My hero!

Here are some more pics I took, some with a tea light candle for perspective. My grandfather says it's still a baby. I don't want to know where daddy and mommy are. 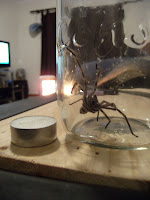 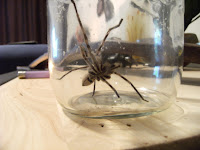 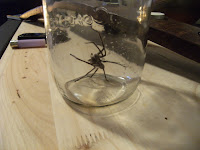 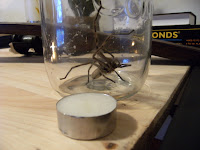 To quote a funny and informative article about rain spiders from IOL:

"...plunge households into turmoil through arguments over who is going to remove them, reducing strapping alpha males into Tupperware-clutching wrecks."

I think I need a shower to wash the creep off me. *shudder*
Translated from gibberish by acidicice at 18:51

Oh she is EXQUISITE!!! I am ever so glad you decided to rescue her instead of kill her.

Oh snap I have had an escapade with one of those too... I am not scared of them... over THERE, but I struggled to get it out the house without shrieking uncontrollably! ;)

Eugh! I was never afraid of spiders until I shared a house with an arachnophobe in London, she used to get me so worked up when I rescued spiders from her room that now I jump when I see them! The worst thing about living in Australia, the spiders here can KILL you!

Angel - Only didn't kill it because we were too scared to go anywhere near it! My Oupa is very brave. My hero!

JaneW - You can be very proud of yourself madam. Shrieks and all!

Super Sarah - *shudder* They will ALWAYS scare the hell out of me!