So. Let's start with some happy news before we get to the grim stuff.

Yesterday I voted in our national and provincial elections. Afterwards I went to claim a free coffee from Wimpy (a chain restaurant in South Africa) after producing my inked thumb: 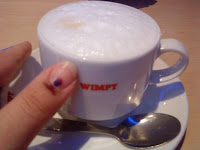 After having breakfast at the Wimpy we walked around the mall a while and Rudi dragged me to go and look at the flat screen TV's *again*. He really has been nagging for one for a long, long time. There were a number of 'Election Day Specials' and we found one that I was willing to get!

You'll remember our TV used to look like this: 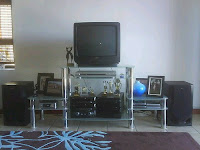 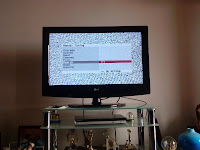 Despite digging my heels in about buying such a big TV that we don't *need*, I must say I quite like it. I sat putting the batteries (which were included) into the remote and tuning all the channels in. I wiped it with the special cloth which was provided to remove Rudi's fingerprints after he set it up. I connected the media player to start watching...I'm like an excited kid with a new toy. Perhaps even more so than Rudi.

Now to slightly worse news. Work isn't getting any better. I haven't been able to read blogs, properly read mail...or do anything that isn't work for a few weeks now. I've been working flat out, no lunch breaks. My whole team has. I feel quite disconnected with the outside world while I'm at work - aside from the little bit of twitter I get in in the morning while the work is being divided up. So if I'm scarce or I don't respond to your e-mail or comment on your blog - you know why. Work will probably be like this till the end of May. Heaven forbid, but it's possible.

Now for the worst news. My grandfather went to go and see his doctor. There are still 4 spots of cancer on his liver, which they can remove if he undergoes a major operation. They also took an x-ray of his lungs to see if the cancer has spread there. If the cancer has spread to his lungs there is nothing they can do for him and he has 6 months to a year to live. The doctor said he could always go for another 2 rounds of chemo - but my grandfather would much rather die. He tries to make light of it and makes jokes about it, but I am really hurt. Leebeesa and I were talking about it this morning. She reckons he is probably trying to make it easier for us by pretending he is OK with it, or that he is ready. He is only 69 (in June). That is neither old nor young. He keeps saying "It's OK I can't wait to see little Jimmy" (he calls James that). Yesterday I told him he better stick around because I want him to meet James' brother or sister. Even if I am pregnant at this very minute and he only makes it to 6 months it will be too late.

My grandfather has always wanted to have a great grandchild. I want to give him one, but at the same time I don't want to hurt myself. If you have been reading my blog you will know how I feel about trying to conceive right now. It's so difficult and so emotionally draining. I'm sure many women who have been through infertility or a loss will understand that.

All that being said, it has not yet been confirmed that the cancer has spread to his lungs. I called him earlier to find out if he had hear and he had not. He is hoping for no phone call as this would imply that everything is OK. I am praying for no phone call myself (goes without saying).

Leebeesa has recommended we start trying again, because you never know what is going to happen. I don't know if I have the strength to do it. Emotionally it started becoming really difficult for me. It also put a strain on my relationship with Rudi. He doesn't understand my emotions and seems oblivious to the fact that I feel like a failure each month we try (so hard) and don't conceive. He is quite happy to 'go with the flow' and wait.

Stuck.
Translated from gibberish by acidicice at 14:45

I'm sorry about your grandfather. :(

Aw no... I'm so sorry about your grampa.
As for the TTC- my sweet acidicice, only you will know when you are ready to try again.