I know I have been really bad at blogging...my apologies!

Wednesday and Thursday were really busy and stressful at work. I barely get a moment to go to the loo, nevermind write a blog entry. I've considered writing my blog at home, saving my entry and just posting at work. It will save me on data bundles and ensure that I blog regularly. Pffft. I wonder when work is going to get better. They have extended the product from hell for yet another month. It's caused so many problems I don't know how they could even have considered it. I suppose the engineers and bookkeepers are not the ones constantly mopping up the mess and dealing with angry customers...so why should they worry?

Anyway...On Friday we left for our much anticipated trip to George. Initially we were planning to leave around 10am, but thought better of it and left around 9:15 following a breakfast at McDonalds. We arrived at about 2PM. Finally meeting Nellie and her family was emotional! It was amazing to finally be able to realize all those virtual hugs we'd shared. 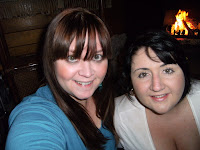 We made a trip back into a place called Heather Park to do shopping for the weekend. After buying what looked like monthly groceries we headed back to our log cabin to get the evening started. We had decided long before the time that we were going to have a braai (BBQ) so at around 6PM the boys set about making a fire and we set about drinking. 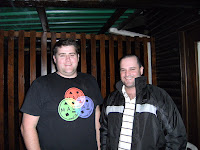 Just as the (bon)fire was really on the go it started pouring down with rain! We started considering trying to cook our meat on the fireplace inside. After getting a fire going inside though, the rain stopped and the skies seemed to clear. Our men were not deterred and decided to salvage the fire outside. The ladies decided to continue drinking. Nellie and I managed to drain 3 bottles of red wine, a bottle of sherry, a bottle of Amarula and a couple of shots of Sambuca. We were on a station to say the least! We managed to eat at around 10PM and played a game of 30 seconds which was never meant to be completed...as Rudi and I were ahead we took the first title of the weekend and went to bed around 1AM.

Unfortunately Nellie had forgotten to take her sugar medication...that combined with the drinking we done made her very ill, so she didn't have a very good night. We all woke up feeling terribly hung over and had a chilled out Saturday. Baby Daniel is *such* a good baby. He sleeps so well and is generally just a happy child. Most of the weekend you couldn't even tell we had a six week old baby with us! 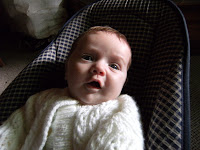 Goliath went about the surrounding area collecting bags full of pine cones to keep the fire going inside. It was FREEZING in George all weekend, but we noted that there was some snow on the mountains there already so it wasn't very surprising. I think the inside fireplace saved our asses! 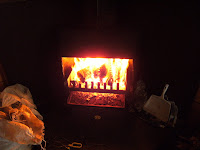 We had bacon, eggs, fried mushrooms and onions for breakfast (courtesy of Rudi) every morning. On Saturday afteroon Nellie made us her famous alfredo. We all enjoyed it very much and decided to have a nap after.

When we woke up Rudi started the pot (potjiekos) and we were looking at photos from Nellie's wedding, honeymoon and the birth of baby Daniel. After eating we decided to play 30 seconds again. Nellie and I on a team were UNSTOPPABLE! The guys had barely moved from the start line and we had won! It's the fastest game I've ever played. Nellie and I are *so* on the same wavelength I would challenge anyone to try and beat us! So we switched teams again and I played with Goliath while Nellie and Rudi played together. It was a much closer game, but Goliath and I took the title. Before we knew it...it was 1AM again. As we had to get up early to pack and we didn't want to waste any time the next morning we decided to hit the sack.

We got up as early as possible the next morning and started packing and organizing everything. Rudi got to making breakfast, which we enjoyed with some champagne to celebrate the weekend and our friendship.

Parting is such sweet sorrow. I bawled my eyes out when we had to leave. It was horrible having to say goodbye, not knowing when we'll see them again. We cut the goodbye as short as possible to avoid getting even more emotional. So with wet cheeks and heavy hearts we departed...

It took us 5 and a half hours to get home. Getting home wasn't as nice as it usually is. We easily could have spent more time with Nellie, Goliath and Daniel. Poor Nellie still had family waiting for them back in Port Elizabeth who had decided to come from Cape Town to surprise them and come see baby Daniel. Needless to say they were the ones that were surprised! The extended their stay by a day so that they could get to see them after they came back.

We all arrived safely. Rudi and I are still on leave today and are going grocery shopping in a bit. What a schlep!

So there's our weekend! Can't wait to do it again!

Facebook album available here.
Translated from gibberish by acidicice at 08:58

awww.. so great to make new friends and have a fun weekend away!
The photos are lovely!!

Enjoy your day off, we have a holiday in Switzerland too, so I'm still in bed!!