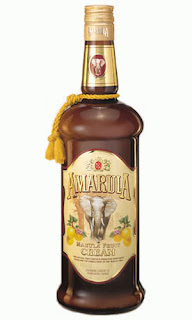 Phew. Not in the best of moods today. I feel so sick!

We went for the braai (BBQ) last night with the M&M's. I call them this because everyone in their household including their two sons have the letter 'M' as their first initial. They were very hospitable and were gracious hosts. They didn't even mind that I watched 7de Laan when we first walked into the door (they don't really watch the programme). Yes I know that's very anti-social and rude, but I never catch the omnibus on a Sunday and it was quite and interesting episode to boot!

I must say they really did spoil us. We had chips (crisps) and dip for snacks. Steak, chicken kebabs, sausage, potato salad and potato bake for the main. We left well fed and with a Tupperware container full of food.

I packed away almost a whole bottle of Amarula and regretted it almost immediately. Amarula is very rich and creamy and immediately after adding food to that rich and creamy mix in my stomach...I felt really ill. This morning the feeling lingers. I feel nauseous. That's about the crux of it. The nausea. I've taken tablets for nausea, but they don't seem to be helping.

Cherry on the cake? I'm working. Cherry on the cherry on the cake? We have a braai at Fence's place tonight. I am really not feeling up to it and now not for the reason you think. Previously I didn't want to go because I know I'll probably be bored to death and I'm working on tomorrow, but now I'm going to be sick *and* bored. Lovely. I suppose I could stay home, but I'll probably just lay awake the whole night wondering when Rudi is coming home. He's also not feeling well, but I don't think that will stop him from going.

I'm definitely not drinking tonight. Really.
Translated from gibberish by acidicice at 09:17

I'm feeling your pain hun - and also have obligations tonight that part of me would rather just forgo...

Plus I went out partying after a 2 day tummy bug, so feeling a tad bit fragile!